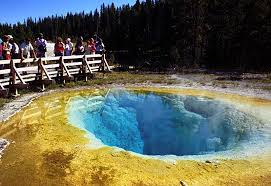 I remember seeing the water boiling as the lakes of Yellowstone were a stone’s throw away. And soon death would take us to all ends, create a murmur of a black shadow and speaking that would follow us. The three of us.

The roads became longer once we got out to the eastern states beyond New York State itself. The Cherokee jeep we had was full. Jan and I had filled it with Chicken Ravioli tins from the American summer camp we had both been working in. Two guys from London and Oxford had joined us. New York State had coped well with the Dutch and Scottish student single figure invasion.

We had contacted the student organisation that we had got the jobs through and they had put us in touch with them. That made one Scotsman, one Dutchman and two others from Great Britain. Accordingly assembled this smattering of nationalities were a European contingent about to go across the continental United States.

The time zones that we went into before we reached Mountain Time, Arizona, I think were punctuated by hundreds of miles of road. We: Jan and I couldn’t drive the car so the others would drive.

‘Did you pay the bill, Jan? ‘Tim said as the long lock of the Kansas highway opened up again and again before us.

‘No, I did not. I presumed Alex or Martin had.’ Jan replied, exhausted as the rest of us after the many hours of driving from New York.

Thereafter, Tim-a psychology student fretted and whined about the possibility of State Troopers giving us forced board in a town’s cells.

The sarcastic humour that Jan got was wasted on the other two who seemed as humourless as the gas station attendants we would meet across the miles and states we had been through before Wyoming.

Wyoming and Montana-this is what we had been looking forward to. The miles of forest containing bear, moose and buffalos and the famed volcanic geysers and springs including Old Faithful.

The Ranger at the Park entrance was surly beyond belief and warned us on no account to go camping beyond the allocated sites without a rifle.

It was getting dark as came to a pretty much deserted stop next to the pools of water that were the colours of the nebulae and supernova of NASA photographs. The bacteria in the super-heated water made them that way, we learnt from a quick scan on the tourist information boards.

We ran down to them as the light faded and could still see dust coming off the wooden walkways across the living, molten earth below; belching hot mud pools were all around.

‘We can get a photo, down near that really blueish one.’ Tim said.

We were all over the fence and walking on the bare and dry skin around the hot mud or water pools. A thousand myriad tones of blue and clear light mixed in the bright August sunlight.

A loud crack. This was from the split in the top layer of mud or rock.

Then Tim’s comic position with one hand and one leg wickedly bent.

Screaming, then more screaming. And all time and belief in solidity, God and mothers descended into movement and panic.

Jan, Mike and I backtracked onto the wooden walkway for tourists. We were gallus after walking for a quarter of an hour on the surfaces near the pools.

What and how-the concepts and panic all mixed as screams got louder yet thinner.

Kicking the wood from the walkway then getting the tallest of us to lie down and reach in.

And Jan bears the burns still up to his shoulder.

A month. A month before we returned to university in our own countries.

Later, even when sleep and work drew you down I always read any signs, watched for a problem when the kids were out or on holiday.

At least it was something to honour him.

This site uses Akismet to reduce spam. Learn how your comment data is processed.