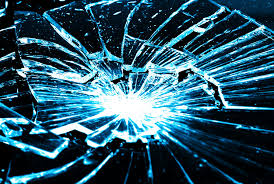 Years ago. In the hiatus between creating a family, being locked into a mortgage and the reality of some bosses who serve themselves here I was walking home in Edinburgh. The bar job had finished in the Grassmarket and the hike to end of Morningside had increasingly become less populated by Saturday night revellers or workers. Only the vast light baths of the double decker night buses broke the monotony.
Near the junction with the clock and the church where I had seen the Sam Shepherd play the car raced by and stopped just around the side. The two men walked out like getting an ice cream. The carrying of the sledge hammers seemed incidental. Within the stride they smashed and walked through the ceiling to pavement glass of the bank which was right on the corner.
Waiting to cross at the lights just ten or so metres away I wondered what I was seeing, where I might put myself and the size (not big) of the two men. The clatter and ring of the alarm bells seemed hushed as not a thing moved in the semi-darkness of this three am time.
The light full stop of a telephone box was round the corner but within sight of the bank on their side. Waking up from the rush of the job and the sweat of the night walk I wondered if as in the films one would be watching. I also wondered if being half decent at cross-country in Ainster meant something if an Edinburgh criminal was after you.
Walking, being drawn to the phone box.
‘You might want to have a wee think about that mate? Anyway we will be aff soon afore the polis get here?’
Maybe about fifty without front teeth he was directly opposite me across the two roads. Standing clearly in the streetlight he was as tense as me as I had nodded some sort of agreement.
‘Nothing doing without going into the safe.’
I surprised him and me with dropping the words into the frosty air that seemed to tinkle like ice in glasses.
‘Don’t be so……’
The second man ran out with a cache of blue bags in his hands and headed into the car followed by my night friend. The Metro screeched off followed by the sound of the inevitable police car.
The police came and both walked over to where I still stood. My conversational partner gone and fled. My personal details given-the novelty of an American birth address: Toledo, Ohio-‘yes. As in the city in Spain’. And the rest. These were all given to the police. I walked on to the ground floor flat up near Calton Hill.

Like all true stories the ending can be messy or softly famished. In a supermarket a good city distance away near the airport I met him. I had picked up a few things and was scanning them. A good few years had passed. He recognised me but couldn’t think where from. The dirt on his jacket and collar and the deep lines under the eyes told me of things he would never.
Leaving having forgotten the change coughed out by the mouth of the machine I only made a nod of the head. Still no glimmer but simple watchfulness. I left him holding the bottle of wine three back in the queue of a main till.

This site uses Akismet to reduce spam. Learn how your comment data is processed.